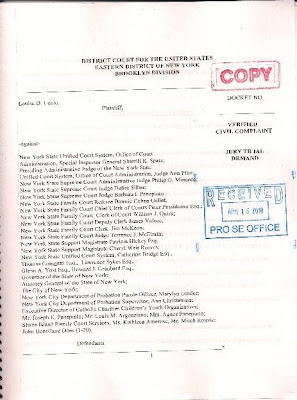 I finally finished!
For my friends my regular readers and those who know of or know me in the real world.. You know I've been working on this lawsuit for years.
Ok, ok, well, not really years on this particular lawsuit.. this one actually took about six (6) months to learn the Federal Rules of procedure and the Federal laws.
But in general I've had to learn more than I ever thought I'd have to learn about New York & Federal law, politics and psychology and before I'd be able to put something like this together and without any guidance, direction or education.. it wasn't easy!!
Nonetheless it's FILED! Donedided.. yes I want to celebrate!
Who's buying me a very long awaited and well earned drink?
P.S. The rest of the suit will be scanned and posted down on the right hand side of this blog with the rest of them ASAP!
Use it as a template if you want and lets take back that which has been taken from us once and for all~ Our Children and our Constitutional Rights!
P.P.S. Don't ever forget Nancy Schaefer! I love myself and have no desire to commit suicide! I don't do drugs, so any over dose would be murder! I drive and ride with 120% awareness and respect for the road.. so no "fatal accidents" should be believed! I'm not leaving the State.. nadda!
In short, if anything happens to me know where it came from!
Lets never forget the late formor Senator, Nancy Schafer!
Or Beverly Eckert!
Two lives cut short.. stifling the exposure they were sharing with us all, and two deaths that I wonder daily about!
Update on Nancy Schaefer and her Husband shot dead
Interesting.. one story says Mr Schaefer shot himself in the chest, the next story claims he shot himself in the head!
Nancy Schaefer One Week A.D.
9/11 Widow Killed in Continental Airlines Commuter Plane Crash in Buffalo - Local News News Articles National News US N...
Activist Killed In Plane Crash Videos - Truveo Video Search
No, I'm not paranoid just a realist, who loves her kids enough to do whatever it takes to let them know they weren't abandoned or unwanted EVER, even if that puts me in harms way!
Posted by Zoey at 11:41 AM 4 comments:

Nancy Schaefer- One week A.D. NewsCred - Create and Discover Newspapers About the Things You Love

Some of my previous posts on this brave and courageous woman.

Update on Nancy Schaefer and her Husband shot dead

Senator Pam Roach.. are they on a witch hunt? I guess YES!

letter from Senator Nancy Schaefer to the families of CPS - DFCS

Refresh - Go to homepage
Posted by Zoey at 11:49 AM No comments:

Biker or Not "BON" gathering for Domestic Violence

I want to share a video that was sent to me this morning by one of my Biker or Not (BON) friends Dino, on domestic violence..

Take a peek, you get to "see" what it "looks like" while youre riding also. He added a motorcycle view (his), on the way to the gathering, it's pretty cool.

His message and link >> "BONfire in The Desert 2010 please leave any comments if you can… positive or not… my improvement depends on it.
Thank you for your support.

If you want to come see what Biker or Not (BON) is all about, check out my profile.. bikerornot.com/HaveUmistakenMe and then if you join, friend request me.

I've also embedded this video on the right hand side of this blog for all to see at a later date.

Refresh - Go to homepage
Posted by Zoey at 11:05 AM No comments: