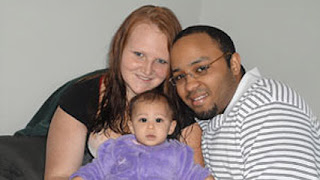 The American Civil Liberties Union of Pennsylvania filed a federal lawsuit on Oct. 28 on behalf of Elizabeth Mort and Alex Rodriguez, whose newborn daughter, Isabella, was seized and held for five days by Lawrence County Children and Youth Services after Mort says she failed a hospital drug test because she had recently eaten a bagel with poppy seeds.
(Nov. 10) -- The American Civil Liberties Union has filed a civil rights lawsuit on behalf of a Pennsylvania couple whose baby was taken away from them after the mother failed a drug test. The ACLU says the mom is drug free and blames the failed test on a poppy-seed bagel.


Mort's daughter, Isabella Rodriguez, was born on April 27 at Jameson Hospital's North Campus in Lawrence County. Before the birth, per hospital policy, Mort was required to submit a urine sample for drug testing. She agreed to the test but reportedly was not told the results.

On April 30, the day after Mort was discharged from the hospital, a caseworker with Lawrence County Children and Youth Services obtained an emergency order and removed the baby from Mort's New Castle, Pa., home because she had allegedly tested positive for opiates.


According to the lawsuit, the level of opiates in Mort's system was well below federal workplace drug testing standards and was caused by Mort ingesting a bagel containing poppy seeds before giving birth. The lawsuit also alleges that Mort passed a subsequent drug test and that Children and Youth Services admitted the mistake, but kept her daughter in foster care for five days before finally returning her to her parents.


The lawsuit, filed by the ACLU in Oakland, Pa., seeks policy changes, damages and attorney fees, the Gazette reported.

"I'm hoping that they'll either change their policies so it doesn't happen to another family or they'll investigate it better before they take babies from their homes," Mort told the newspaper.


Officials with Jameson Hospital's North Campus have not yet commented on the case. According to the Gazette, county representatives said they acted appropriately.

A freind of my husbands sent us your article.He recentlly lost his job of 24 years,401k,all benifits,insurance you know all the thing your loose,after testing positive for a minute amount of cocaine matabolites after topping his coffee of at home before going work at 4 am with my tea.A tea called inka tea.Sold all over the web,it is a green tea,but i guess it is made from the coca plant.No-one at his work ever heard of it,no where in his employee handbook does it band drivers from drinking tea.Like you,he passed every drug screen for 23 years,the coca plant after man takes the leave and does all kinds of chemical stuff to it will make cocaine,you need 500 pounds of leaves to make 1 gram of cocaine.In it natural form as a tea or as a plant it is coca,so actually they are testing for coca metabolites,i bet you knew that right,i being a wise butt,we knew none of this till are lives were destroyed for unkownly drinking a cup of tea that are brillant drug zars have deemed cocaine.I dont know about you,but tea looks nothing like what i have been told and seen on t.v. is cocaine, they fired him after 24 years of service.A lot of people dont know that these drug test dont work all the time.There are hundreds of things that can cause false positives.I am very happy for you and your new family your lives are back to what is as normal as possible.However our lives with thie economy ,as you can figure out after 24 years my hubby was maken a good buck,we will most likelly loose everything over a cup of tea,that wrong,but our goverment still does nothing about it,they dont care,its not there kid,there home to loose,there lives ,so they dont care.We may contact the aclu after seeing your article to see if they can also help us.good luck to you and your family,i am glad the truth came out for you and made thing right.maryw

The ACLU themselves must have been shooting up the day they decided to take on this case. Any legitimate, peer reviewed medical expert is going to blow them out of the water.

wow,see thats the really really big problem w/alot of things w/this country,people assume they know the correct answers and tell people the absolutley WRONG THING. First lets clarify,they DO NOT TEST FOR DRUGS!!!!!!!!!!!!!!!THEY TEST FOR METABOLITES.2ND unless u know what your talking about on a subject ,dont lie.This poor couple got screwed.The drug test is not a drug test.The a,c.l.u should however represent all cases of this type of terrible error,not just ones that effect children,mw

DR.BECKY NEEDS TO GO BACK TO SCHOOL TO LEARN SOMETHING,ANYTHING WOULD BE A GOOD PLACE TO START.MW