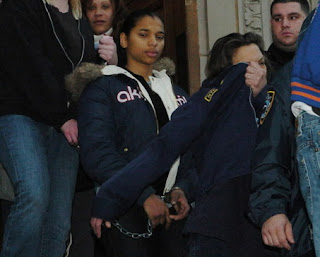 Staten Island Advance
Monday December 29, 2008, 5:45 PM
Melissa Sekulski (center, wearing hooded jacket) has been charged with manslaughter in the death of her 10-year-old son, Jaquan Porter.
A day after she stood stone-faced as she was arraigned on first-degree manslaughter charges in the death of her 10-year-old son, Melissa Sekulski broke down in tears during a Family Court hearing in Manhattan today.
The Mariners Harbor mother appeared before a judge on a warrant stemming from a 2005 filing in which the youngster's father requested court-ordered visitation.
During the hearing, it came to light that Ms. Sekulski defied a judge's order by not allowing the boy's father to visit for nearly three years.
Family Court Judge Helen Sturm identified the boy's father only as "Mr. Porter" who filed a request for court-ordered visitation with his son in June 2005.
Ms. Sekulski didn't show up for a hearing on the matter in July 2005, triggering a warrant that was issued "for non-appearance" in August 2005.
The judge said Ms. Sekulski also missed subsequent court hearings regarding the father's visitation in September 2005, October 2006, October 2007, and in June earlier this year.
"This is an involuntary return on a warrant today," Judge Sturm said.
Ms. Sekulski, dressed in a green prison-issued jacket and gray denim pants, broke into tears as court officers led her handcuffed into the Manhattan Family courtroom. She cried throughout the brief hearing, and acknowledged family members as she was led away sobbing.
Family members declined to speak with reporters afterwards.
Ms. Sekulski was arrested Saturday night, a day after police found Jaquan Porter "unresponsive and unconscious" following a beating in which his head was slammed repeatedly into a wall. The 250-pound boy was pronounced dead at Richmond University Medical Center, West Brighton.
The Medical Examiner performed an autopsy and ruled the death a homicide.
Sources close to the case said investigators are looking into the possibility that the youngster was slammed head-first into a wall and the side of a tub. They are also questioning where the beating took place.
"The actual assault could have occurred in Brooklyn, but [Porter] died in Staten Island," one source said, adding, "Now, there's a question of jurisdiction."
If authorities determine that the fatal beating took place in Brooklyn, the case would be handed to the Brooklyn District Attorney's office for prosecution.
Ms. Sekulski was arraigned Sunday in Stapleton Criminal Court on a charge of first-degree manslaughter.
Court papers revealed that Ms. Sekulski made oral, written and videotaped statements admitting that she repeatedly beat Jaquan and used a belt or a belt buckle "on multiple occasions" over the course of three years.
On Dec. 26, the boy's head was slammed "against a wall at least twice," according to court records.
"The defendant has been physically abusing the victim for years," Assistant District Attorney Michael Schollar said during Ms. Sekulski's arraignment.
The prosecutor described the first-floor apartment on Grandview Avenue where Ms. Sekulski lived with her son as filthy, roach-infested, and devoid of food in the refrigerator.
"She thrashed him with a belt and belt buckle, and burned him with the buckle," Schollar charged.
Neighbors told the Advance they saw Ms. Sekulski running out of the apartment Friday and falling on her knees screaming, "My son, my son, pray for me ... He's obese!"
One neighbor said she was shocked to learn there was a child living with Ms. Sekulski.
"No one knew him," Arnell Bryant told the Advance. "I stand at that bus stop every day, we never seen him."
Ms. Sekulski is scheduled to appear in front of a grand jury Wednesday.
Reported by Jeff Harrell
Staten Island mom accused in beating death of son repeatedly defied judge - Staten Island Real-Time News - SILive.com
My Two Cents..
Obviously .. the gender of this apparent psychopath.. and the gender of the psychopath in the story below make no diffference.. in the deaths of innocent lives.. do they?
This story however.. proves my point clearer.. that psychopaths refuse access to the other parent because of thier entitled attitude.. sadly that is also the attitude that allows them to kill!
REFRESH - Go to Home-Page
Posted by Zoey at 12:38 AM